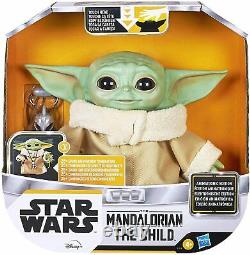 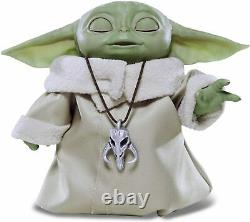 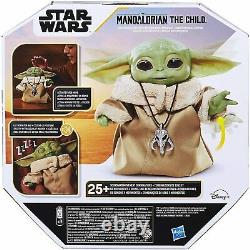 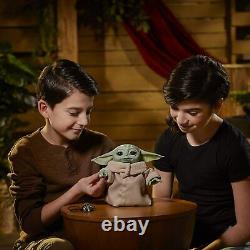 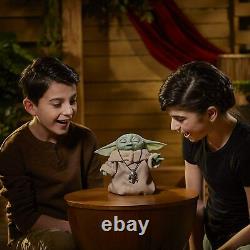 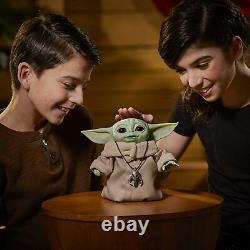 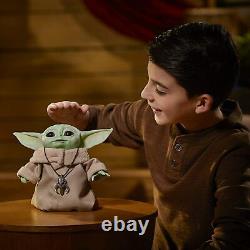 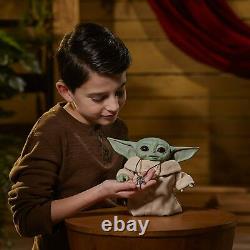 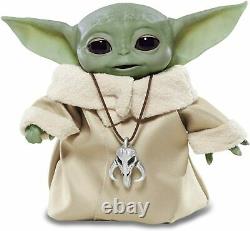 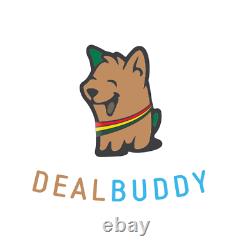 NEW In Original Packaging - Make sure to change bottom switch from Test to "ON" before using. Star Wars The Child Animatronic Edition AKA Baby Yoda with Over 25 Sound and Motion Combinations, The Mandalorian Toy for Kids Ages 4 and Up. This is truly an amazing toy - Children and even Pets are FASCINATED by this small, but amazing Baby Yoda! SERIES-INSPIRED SOUNDS: Touch the top of The Child Animatronic Editions head to activate sound effects inspired by The Mandalorian, including happy and excited, giggles and babbles, tired and sleeping, and Force effects sounds. ANIMATED TOY: Features motorized movements, including a head that moves up and down, ears that move back and forth, eyes that open and close, and more.

FORCE ACTIVATION: Boys and girls ages 4 and up will love patting The Child Animatronic Editions head 3 times for Force activation, in which the animatronic toy will raise its arm, close its eyes, and sigh, as if using the Force. FORCE NAP: Pretending to channel the Force takes a whole lot of energy and requires a lot of rest. Lay The Child toy down and it will close its eyes and take a Force nap.

He may look like Baby Yoda, but this lovable creature is called The Child - and now you can become his protector with this animatronic toy from Star Wars. Touching the top of The Child Animatronic Editions head activates over 25 sound and motion combinations, including happy and excited sounds, giggles, babbles, and more, all while the figures head moves up and down, ears move back and forth, and eyes open and close. Boys and girls ages 4 and up can pretend to harness the power of the Force as The Child toy closes its eyes, raises its arm, and sighs as if exerting a great amount of energy. Features motorized movements, including a head that moves up and down, ears that move back and forth, eyes that open and close, and more.

Hasbro and all related terms are trademarks of Hasbro. Launch into lightspeed adventures with an expansive collection of classic and new characters, vehicles, and role-play items that feature the authentic movie-styling and battle action of the Star Wars universe. Take on the role of the some of the greatest heroes and most fearsome villains in the galaxy with a wide selection of Lightsabers that only Hasbro Star Wars can offer.

Re-create exciting scenes and moments from the Star Wars saga, and the all-new Star Wars: Rogue One movie, with toys that let you re-live all of the moments from the epic story of good versus evil in a galaxy far away. Build your Star Wars collection with the authentic, highly detailed Star Wars collectible figures, vehicles, and Force FX Lightsabers from The Black Series. With impeccable features and articulated movement, this series embodies the quality and realism loved by Star Wars devotees young and old. Advance into battle with role play gear that includes blasters, masks, and iconic, customizable Lightsabers that are part of the Star Wars Bladebuilders system. With action-packed features across the entire Hasbro Star Wars line, theres something for everyone in the Star Wars universe. For nearly forty years, Star Wars has fueled the imaginations of generations, and now its your turn to follow the adventures of Star Wars stories old and new. Join the defiant Jyn Erso on a top-secret mission to steal the plans to the Galactic Empires most fearsome and deadliest construction, the superweapon known as the Death Star. Embark on an epic journey alongside the Rebel heroes where Imperial officers are charged with protecting the Empires invention against the Rebels at any cost. Put yourself in the middle of all the galactic action with Star Wars toys from Hasbro.

May the Force be with you! This copy is intended as placeholder text only and is not representative of individual items in the line. Hasbro and all related properties are trademarks of Hasbro. The item "Star Wars Baby Yoda Grogu The Child Animatronic Motion Talking Mandalorian Toy" is in sale since Friday, November 1, 2019.

This item is in the category "Toys & Hobbies\Action Figures\TV, Movie & Video Games". The seller is "dealbuddy" and is located in Canoga Park, California. This item can be shipped worldwide.