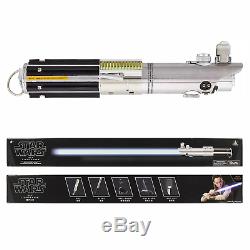 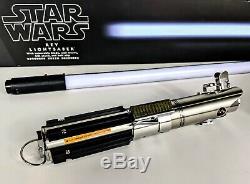 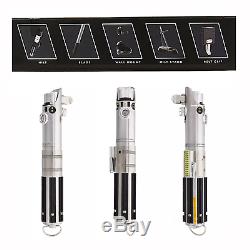 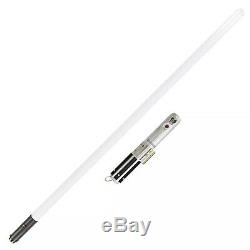 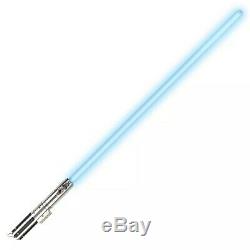 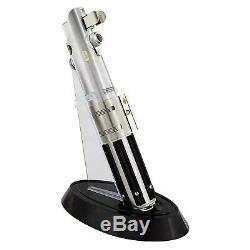 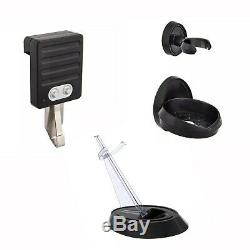 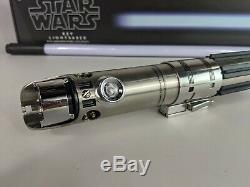 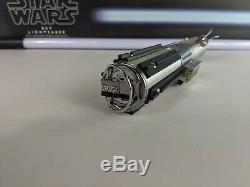 Star Wars Disney Parks EXCLUSIVE Lightsaber Hilt with Removable Blade + Wall Mount, Hilt Stand, and Belt Clip. A true-to-story replica of Rey's iconic blue lightsaber as featured in Star Wars: The Last Jedi. This authentically designed and detailed lightsaber is complemented by a wall mount and hilt stand for the ultimate in collect-ability. Anakin, Luke, and Reys lightsaber Debuted in Star Wars (1977). The original and arguably most iconic hilt, Anakin Skywalkers blue-bladed lightsaber was wielded through the Clone Wars and briefly after he became Darth Vader.

He lost it in a duel against his former master Obi-Wan Kenobi on Mustafar. Two decades later, Kenobi passed the weapon down to Skywalkers son, Luke, who utilized it in campaigns against the Galactic Empire. The lightsaber was briefly reunited with its original owner in 2015 comic Star Wars No. 1, set after the destruction of the Death Star. The meeting between Luke and Vader with the Sith Lord recognizing his former weapon further encouraged their eventual duel in The Empire Strikes Back (1980).

Outmatched by the Sith Lord, Luke lost his right hand along with the weapon. The hilt was not seen for 30 years until it was discovered at pirate Maz Kanatas castle in The Force Awakens (2015). After a brief period with former stormtrooper Finn, it has since remained with Rey, a Jakku scavenger. She was last seen using the lightsaber in The Rise of Skywalker, although with a black plate covering where it was recently sheared. Star Wars: The Last Jedi.