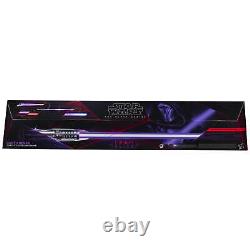 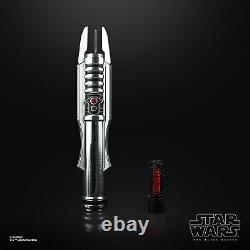 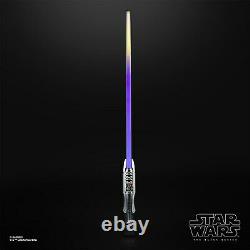 Journey to the Dark Side and shop this Official Darth Revan Lightsaber replica Toy! This Force FX Lightsaber is inspired by the complex character from the Star Wars saga, Darth Revan. Darth Revan first appeared in the Star Wars video game, Knights of the Old Republic in 2003. His story and origin was detailed further in the sequel to the video game in 2005. Revan was found by the Jedi Order as a child and became the apprentice of Jedi Master Kreia.

The Young Padawan had a hunger for knowledge and power, and soon became the Jedi's most promising pupil. Darth Revan lived approximately 4000 years before the events of the Skywalker Saga. In Star Wars Lore, Revan was a powerful Jedi who served in the Mandalorian Wars as the Supreme Commander of Jedi and Galactic Republic forces. He fell to the dark side of the Force and became a Sith known as Darth revan.

Along with his Padawan-turned-Sith apprentice Darth Malak, he wreaked havoc on the entire Republic. His complex origin and backstory, alongside his constant switching between the light and dark sides of the force, made him an instant fan-favourite! Darth Revans journey from Jedi Knight to Sith Lord and back again is evidenced by the color of his lightsaber. As a Sith Lord, Revan lightsaber has a red blade, but as a redeemed Jedi Knight he fights with a purple-bladed lightsaber. Recreate your favourite gameplay moments or let your imagination run wild!

With this incredible replica Force FX Lightsaber, featuring advanced LED technology, fans can imagine they are truly a part of the Star Wars adventure. This incredible toy includes a removable kyber crystal, which in the movies were rare, Force-attuned crystals that were used by the Jedi and the Sith in the construction of their lightsabers. This feature just adds to the incredible detail and care taken in this product's design! Combining advanced LED lights and sound effects inspired by the movies and video game, this Darth Revan Official Star Wars Lightsaber will make the perfect gift for any fan! Star Wars products are produced by Hasbro under license from Lucasfilm Ltd. Hasbro and all related terms are trademarks of Hasbro. LED Lights and Sound Effects: Combining advanced LEDs and video game-inspired sound effects, the Force FX Elite Lightsaber is the most realistic Force FX Lightsaber yet. Authentic Movie-inspired Product: The real metal hilt features design and deco based on Darth Revan's iconic lightsaber featured in the Star Wars: Knights of the Old Republic video game. Video-Game inspired Sound Effects: Press buttons on the hilt to activate sound effects, progressive ignition, blaster deflection effect, wall-cutting effect, and purple-to-red color-changing blade effect.

Includes Stand and Removable Kyber Crystal: Proudly display this lightsaber on the included stand, with or without the removable blades, and show off the included removable kyber crystal. The item "HASBRO STAR WARS THE BLACK SERIES DARTH REVAN FORCE FX ELITE LIGHTSABER. UK STOCK" is in sale since Tuesday, September 22, 2020.