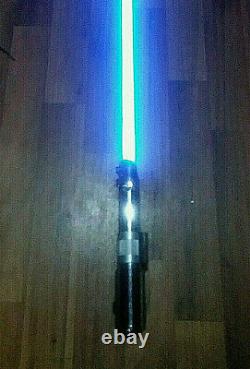 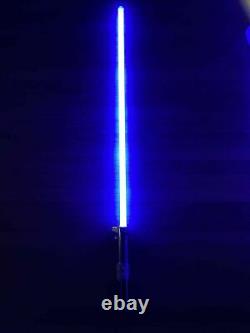 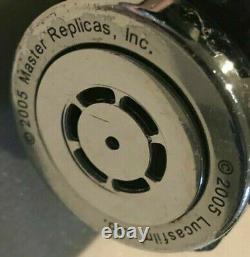 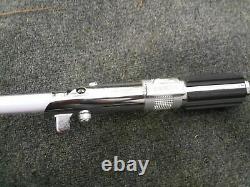 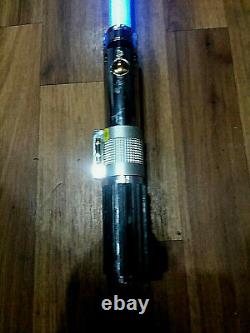 Anakin Skywalker Master Replicas Force Fx Lightsaber, 2005: ORIGINAL STAR WARS Anakin Skywalker MASTER REPLICA Fx LIGHTSABER 2005. If you havent heard of these fantastic collectables before it has the following features: A realistic durable metal hilt that looks and feels like a real lightsaber with a glowing blue blade that is illuminated by 64 coloured super bright LEDs. These ignite in sequence to give the illusion of the lightsaber powering up and powering down when activated.

The sounds that come from these sabers are authentically digitally recorded from the movies, giving the idle background hum, famous swinging noises and the effective clash sound on impact. These effects work through movement and collision detection electronics concealed in the hilt. The activation / deactivation noises run alongside the blade ignition lighting to further the impression given in the films. These sabres are very collectable and are not now in production, as the plastic ultimate FX ones seem to have taken over.

This is a tragedy as these are infinitely superior and are of amazing detail. Who knows what will happen now Disney have the control.

If as looks likely, these are not produced again the value will be sure to skyrocket when the new films are out. What is important to note if you are collecting these is that originally Master Replicas (MR) had the licence to distribute these, later on they lost the rights to manufacture and then Hasbro took over.

Debatably the MR are more popular amongst collectors, however Hasbro have produced a few which are unique and very sought after. All Master Replicas Sabers, like this, have fixed blades, permanently attached to the hilt. After collecting for many years now I have noted that despite some being very concerned with whether a saber is MR or Hasbro, there were models produced by both which are identical - I don't mean very similar, but actually identical.

This is one of those models. Now i've never managed to verify this for fact but I believe it was probably that both companies had the rights to distribute globally, and it was actually likely a 3rd party that manufactured them. Might be worth bearing in mind as some describe Hasbro as cheaper / inferior; this is without evidence and surprising as most component parts are identical from both companies. If you toying with the idea of getting a Force FX lightsaber, I can only say give it a go, they make an amazing addition to a costume (any Sith lord / Jedi), look great on display and are great to battle with if you had two. However ths is a choice for you and I would not necessarily advise it if you want to collect, as damage hugely affects the value. This saber also has a ring on the end so can be attached to a belt. THIS RARE & HARD TO FIND ANAKIN SKYWALKER MASTER REPLICAS FORCE FX LIGHTSABER IS IN WORKING CONDITION WITH LIGHTS AND SOUND IN THE SABER I DEMONSTRATE THAT THE SABER WORKS SUPER WITH A BRIGHT BLUE BLADE FULLY LIT, A CRISP CLEAR SOUND EVERYTHING IS WORKING LIKE NEW INCLUDING THE SWITCH THE STEEL HILT IS IN VERY GOOD CONDITION WITH MINOR COSMETIC WEAR AND THE GRIP APPEARS TO BE LIGHTLY USED SHOWING VERY FEW TO NO SIGNS OF NORMAL WEAR FROM AGE AND USE, THIS IS A WORKING ANAKIN SKYWALKER BLUE SABER. Anakin Skywalker Master Replicas ForCE FX LIGHTSABER 2005. The item "Anakin Skywalker Master Replicas Force Fx Lightsaber 2005 Blue Blade / Tested" is in sale since Thursday, November 19, 2020. This item is in the category "Collectibles\Science Fiction & Horror\Star Wars Collectibles\Lightsaber & Weapon Replicas". The seller is "sweetcheeeks38" and is located in Bunnell, Florida. This item can be shipped to United States, Canada, United Kingdom, Denmark, Romania, Slovakia, Bulgaria, Czech republic, Finland, Hungary, Latvia, Lithuania, Malta, Estonia, Australia, Greece, Portugal, Cyprus, Slovenia, Japan, China, Sweden, South Korea, Indonesia, Taiwan, South africa, Thailand, Belgium, France, Hong Kong, Ireland, Netherlands, Poland, Spain, Italy, Germany, Austria, Bahamas, Israel, Mexico, New Zealand, Singapore, Switzerland, Norway, Saudi arabia, United arab emirates, Qatar, Kuwait, Bahrain, Croatia, Malaysia, Chile, Colombia, Costa rica, Dominican republic, Panama, Trinidad and tobago, Guatemala, El salvador, Honduras, Jamaica, Antigua and barbuda, Aruba, Belize, Dominica, Grenada, Saint kitts and nevis, Saint lucia, Montserrat, Turks and caicos islands, Barbados, Bangladesh, Bermuda, Brunei darussalam, Bolivia, Egypt, French guiana, Guernsey, Gibraltar, Guadeloupe, Iceland, Jersey, Jordan, Cambodia, Liechtenstein, Sri lanka, Luxembourg, Monaco, Macao, Martinique, Maldives, Nicaragua, Oman, Pakistan, Paraguay, Reunion, Uruguay, Russian federation.